Hi everyone!  I’ve been reading The Express Diaries, by Nick Marsh… and it’s an incredible read.  A Lovecraftian mystery on a train — and not just any train: The Orient Express.  I highly recommend it, and we’ll be talking with the author today on the regular Sunday video chat at 6:00pm Eastern Time (5pm Central, 3pm Pacific). 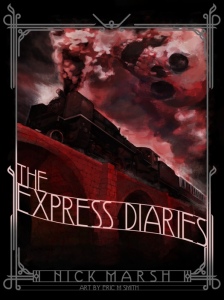 Join us or watch LIVE!  Nick and I are giving away two print editions and ten Kindle editions to LIVE viewers.  To watch LIVE, simply go to this webpage at 6pm ET (no sign-up required).

If you’d like to join the video chat, email me at lovecraftezine@gmail.com right away to let me know.  All are welcome… you don’t have to be an author or an editor.

And now, here’s a review of The Express Diaries, by Dave Brzeski:

The Express Diaries by Nick Marsh

When Nick Marsh contacted me to ask me if I’d be interested in reviewing his book, I said, “Sure, just send me a Kindle copy, or a .pdf.” Nick said he’d happily send me a Kindle copy, but he’d really like to send me a copy of the hardcover too. I realised why as soon as I opened the package a few days later. The book is gorgeous! It’s an obvious labour of love, from the fabulous illustrations to the red bookmark ribbon.

I hadn’t realised at the time that it was based on a Call Of Cthulhu role-playing campaign. Had I known, I have to admit it might well have put me off. As a general rule, I’ve found books and films based on games to be disappointing. Not always—I really liked some of the ‘World of Darkness’ based novels for instance—but more often than not.

I’m very glad I wasn’t put off, because I liked this book a lot. It’s a genre mash-up, set in 1925, combining an Agatha Christie style crime thriller with H.P. Lovecraft’s mythos. Nick Marsh does a superb job of capturing the period flavour in his characters. Each of them has their own voice, easily distinguished from the others, which is no mean achievement. The action is set on the Orient Express and its many stops en route. There’s even a very brief, unnamed cameo from a certain Belgian detective with a waxed moustache.

The Lovecraftian elements are much more subtle than I expected. There’s just the one early reference to Unaussprechlichen Kulten by von Junzt, but that’s it as far as the ubiquitous tomes and entities of the Cthulhu Mythos are concerned. This is by no means a bad thing. Many would say that over-reliance on such trappings does not necessarily make for good Lovecraftian stories and they’d be right.

Apart from the beautiful presentation, the main strength of this book is in the characterisations. This is ironic in a way, because that was certainly not one of the strengths of either Christie, or Lovecraft. All the characters in ‘The Express Diaries’ are fully rounded, with both strengths and faults. Colonel Neville “Never” Goodenough, for instance is in many ways a typical, jingoistic, racist, military man of the period, but that doesn’t stop him from being a good, stand-up hero in all other respects. He’s realistically handled in the way his growing respect for particular individuals doesn’t temper his opinion of foreigners in general. That particular lapse in logic is so common in many casual bigots.

As well as Colonel Goodenough, the cast of characters includes: Mrs Elisabeth (Betty) Sunderland—widowed matriarch of the Yorkshire Sunderlands with a chequered past, which includes a one-time sideline as ‘The Silver Fox’; her niece, Mrs Violet Davenport –wife and assistant to the famous magician, ‘The Marvellous Davenport’; her secretary, Miss Grace Murphy—a young spinster; Professor Alphonse Moretti—an emeritus professor in European history and languages at the Universities of Florence and Belarus and Milos Valinchek—a Czechoslovakian arms dealer who was hideously scarred during the Great War.

The entire book is composed of diaries, letters and journal entries by the various characters, which is a nod to fiction of a certain vintage. It’s done exceptionally well though. Much as I loved ‘Dracula’, I thought I’d die of boredom during the interminable exchanges of letters between Lucy and Mina. ‘The Express Diaries’ doesn’t suffer from this at all. The book remains gripping from cover to cover. Those who like the light tone of Agatha Christie novels, however, should be warned that at times the events take on a nastiness that would scare the hell out of many of her fans, and might even cause Miss Marple to drop her knitting in horror.

I intentionally haven’t said much about the plot. To put it briefly, we have a collection of fascinating characters in a classic setting; mysterious cultists and a particularly nasty monster, all trying to secure all the parts of a mysterious occult statue—The Sedefkar Simulacrum—which also has the unfortunate effect of corrupting all who possess it. The concept of a race against time with evil cultists to gather the disparate parts of some means to acquire great power is by no means new, but it’s particularly well-handled in this book.

The artwork by Eric M. Smith is exceptional. Apart from the cover, there are fourteen full page color illustrations, which are presented, for the most part, in sepia tones, which gives them an even more effective period feel. There are also many black and white spot illustrations, throughout the book, of letters, photographs, tickets, telegrams and other props from the story and a beautiful, colour map of the route our heroes take on the end-papers.

I recommend this book very highly. If you can afford it, buy the hardcover. I suspect it’ll be quite sought after once it goes out of print.