Another dusty chile-growing town
Just off the highway in New Mexico,
With banners, flags, & streamers hanging down
To brighten streets where weekend tourists go . . .
Yet ancient, alien malevolence
Twists through this scene of rural innocence.

Though every booth & table in the square
Entreats Our Lady’s favor on this day
Of celebration, few outsiders care
To question further. Locals glance away,
Or offer a cervaza – Ice cold! Free! —
In hopes the curious will let things be.

Some few, alas, do not. As afternoon
Wears on into a raggedy parade
Which manifests no sign of ending soon,
These unwise souls go seeking after shade
Down narrow streets where shadows twine & snake,
Luring them onward to their last mistake.

A low adobe chapel wedged between
Two buildings lost already to the earth
Seems quaint enough – until the altar screen,
Adorned with serpent-shapes whose length & girth
Suggest some mythic origin. Outside,
The throb of drums begins. But where to hide?

Before the altar, one tile out of place
Reveals a glimpse of darkness echoing
Off rough-carved stairs descending into space
Which stinks of primal musk. Though everything
Of reason rules against it, still those drums
Spark horror in their hindbrains. Down they come.

What waits below is older than Man’s dreams
Of deity in his own image. Here
Within this cavern sanctified by screams
& sacrifice for generations, fear
Assumes a shape instinctively profane —
A writhing, hissing insult to the brain.

Past other totem animals of faith,
The serpent grips imagination tight
Within its coils: thus Yig, dread father-wraith
Of rattlesnakes who haunts the desert night —
& shadowing that presence, She who bore
Him & his demon siblings by the score.

The azure atmosphere of deep K’n-Yan
First held the mysteries of Her worship, while
This young world harbored other lords than man:
Star-spawned abominations, strange & vile,
Who voyaged deathless through the vacuum seas
To spread their stain on our mythologies.

Struck suddenly aghast before Her form
Whose twin mouths gape with venom & desire,
The interlopers (too late!) hear a swarm
Of devotees descending, bearing fire
& sharp obsidian to spill that wine
Most suited to Our Lady’s dark design.

Another sleepy chile-growing town
Just off the highway in New Mexico,
But now these precious fields lie green, not brown,
Beneath the sun. Best tourists never know
The secret of this land’s fertility . . .
O Serpent-Skirted One Who Should Not Be! 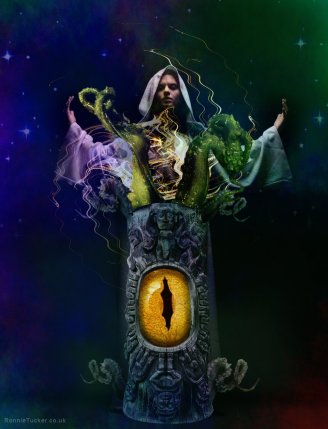 Fiesta of Our Lady – illustration by Ronnie Tucker – click to enlarge

Ann K. Schwader’s most recent collection of dark verse, Twisted in Dream, was published in Dec. 2011 by Hippocampus Press. Her previous collection, Wild Hunt of the Stars (Sam’s Dot), was a Bram Stoker Award finalist for 2010. Objects from the Gilman-Waite Collection, a tale of art and betrayal, is forthcoming in Book of Cthulhu II. Ann lives, writes, & volunteers at her local branch library in suburban Colorado. To learn more about her work, visit her website.

About her poem, Ann says: “Coatlicue is one of the bloodier female deities in the Aztec pantheon (are there any nice ones?), and it just struck me that Yig might have been one of her children. She is the mother of other gods, so why not? I really enjoy digging into mythology to find the Secret History of the Mythos – it’s amazing how often you can find something useful. I also love trying things with the Zelia Bishop collaboration stories, because ZB was a woman of the West, writing about the West.”

If you enjoyed this story, let Ann know by commenting — and please use the Facebook, Twitter, and Google Plus buttons below to spread the word.

9 responses to “Fiesta of Our Lady, by Ann K. Schwader”