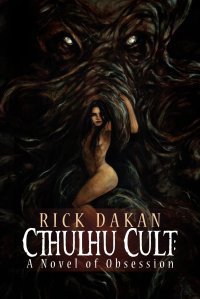 At least, they’re new to me.  I’m enjoying the first three, and I’m looking forward to reading the fourth!  Click the book titles to purchase at Amazon — I think you’ll enjoy these books.

The Cthulhu Cult, by Rick Dakan.  “Having fled town under a cloud of salacious scandal, Shelby Tyree has returned, a mysterious woman at his side and a strange new devotion to horror writer H.P. Lovecraft in his head. His childhood friends Rick and Conrad scarcely recognize Shelby, who has been transformed from a rakish dilettante into a zealous guru devoted to his own pseudo-religion. They take it upon themselves to discover what Shelby is really up to. Why has he founded his own church, devoted to a presumably fictional demonic alien? Is it possible Shelby’s lost his grip on reality or is somehow under the spell of this mysterious woman? Or is it possible that Shelby has uncovered some secret truths that man was not meant to know?”

Judas Goat, by Greg F. Gifune.  “It had been twenty years since Lenny Cates had seen or heard from his old college flame Sheena. Theirs had been a brief and tumultuous relationship that ended badly, so when Lenny is notified that Sheena has died in a freak accident and has left her entire estate to him, he feels compelled to investigate the last days leading to her untimely death. As Lenny arrives in town to settle her affairs, he begins to dig deeper into Sheena’s life and learns her final days were cast in shadows of loneliness, depression and experiments in black magic. Soon, Lenny will discover that Sheena’s death has awakened something insatiably demonic and old as mankind, something lying in wait and growing stronger in a quiet little town where the horrors of the past never truly die, pain is eternal, and nothing is as it seems.”

The Immortal Body, by William Holloway.  “Detective John Mitchell thought he understood murder. But that all changes when monsters are born during a faith healing at a local church. Psychic Medium Sarah Lynn Beauchamp thought she understood the dead, but the dead have a new plan for her. SAS veteran Dr. Menard thought the War was through with him until an unspeakable evil returns from the depths of a forgotten time. Behind it all, a mysterious figure lurks, controlling the actors from the shadows, ushering an end to reason, sanity and the world as we know it.”

Eldritch Chrome, an anthology of Mythos short stories.  “During the decades since H.P. Lovecraft first wrote of the Cthulhu Mythos, many authors have crossed his themes into other genres, enhancing his original vision with stories taking place in the distant past, in the far-flung future, and in myriad places in-between.  Cyberpunk tales are written in dark, gritty, film-noir styles. Their protagonists live and die at the bottom echelon of an electronic society gone awry. They may be seedier, poorer, and less inclined to make moral judgements than stoic Lovecraftian New Englanders, but in Cyberpunk-Cthulhu tales they encounter the same horrors as their more-genteel predecessors.  Confronting monstrous entities and fiends from beyond space and time, the Cyberpunk-Cthulhu hero may wield high-tech weapons and have other advances at his or her disposal. To beings where time has no meaning and whose technologically is so advanced that their actions seem supernatural or powered by magic, no human finds an advantage.  This is the Cyberpunk-Cthulhu world—mythos horrors lurk at the edge of society, mythos-altered technology infects human beings, dark gods lurk in cyberspace, and huge corporations rule society while bowing to entities inimical to humankind.”

One response to “Four new Lovecraftian books I recommend”