Here’s a short list of some new and upcoming Mythos, Lovecraftian, and Weird books. Most of these were either published this year or will be published before the year is out, but one or two are older books that I feel deserve more attention than they have received.

If you have any suggestions for future lists, please email me at lovecraftezine@gmail.com .

AVAILABLE FOR ORDER OR PRE-ORDER: 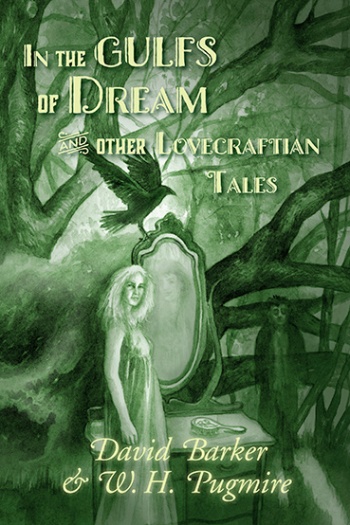 In the Gulfs of Dream and Other Lovecraftian Tales, by David Barker and W.H. Pugmire. David Barker and W. H. Pugmire explore the uncanny realms of Lovecraftian horror, influenced by the fiction of that eldritch master, H. P. Lovecraft. With individual tales by each author, and two extraordinary and lengthy collaborations, the authors prove that the Cthulhu Mythos remains a valid and never-ending source of inspiration.

A Lonely and Curious Country: Tales from the Lands of Lovecraft, edited by Matthew Carpenter. Horror can lurk in the most unlikely places: from the secluded cottage to the teeming metropolis. Lovecraft knew that terror could be rooted in the geography of a place as much as in an uncaring cosmos or a man’s soul. In these 17 brand new tales of chilling Lovecraftian horrors by leading authors, discover new lands of terror. Learn the truth about the glories of Y’ha-nthlei and what really happened to Erich Zann. Discover the fate of Tillinghast’s monstrous machine and do a deal with Nyarlathotep down in the byways of Mississippi. Sometimes that lonely farmhouse, brooding silently in its isolation, can be more terrifying than forgotten monoliths on an uncharted Pacific island.

Midnight in New England, by Scott Thomas. From the author of The Sea of Ash! Evoking the times and styles of Edgar Allan Poe and H. P. Lovecraft, this collection of original stories is set in 18th and 19th century New England―when restless spirits seemed to roam more freely. Not quite horror, not quite mystery, these dark yet spellbindingly eloquent tales hover on the edge, threatening at every page to plunge the characters into madness.

Dark Equinox and Other Tales of Lovecraftian Horror, by Ann K. Schwader. Ann K. Schwader, who has already distinguished herself by an array of meticulous and imaginative poetry that elaborates upon themes in H. P. Lovecraft’s work, has in the past decade and more written some of the most scintillating tales of any author of Lovecraftian fiction. In a number of stories, Schwader has written interconnected narratives that bring Lovecraftian terror to the remote regions near her native Wyoming, with Native American characters drawing upon their spiritual resources to battle the cosmic forces.

Visions from Brichester, by Ramsey Campbell. This companion volume to the complete PS Publishing edition of “The Inhabitant of the Lake and Other Unwelcome Tenants” collects all of Ramsey Campbell’s remaining Lovecraftian stories that are of less than novel length. It begins with the first tale Campbell wrote immediately after that first Arkham House book, and comes up to date with the novella The Last Revelation of Gla’aki, his recent return to his own Lovecraftian territory, where he rediscovers Lovecraft’s first principles and strips away the accretions of the mythos that developed after Lovecraft’s death. The book includes the first publication anywhere of the first drafts of “Cold Print” and “The Franklyn Paragraphs”, and offers the bonus of “Mushrooms from Merseyside”, all his Lovecraftian tales inhumanly transmuted into limericks. The book also collects his Lovecraftian non-fiction, not least his transcription of an English correspondent’s letters to Lovecraft and a close reading of three Lovecraft tales. Like the companion volume, this book is superbly illustrated by Randy Broecker in the great tradition of “Weird Tales”.

Innsmouth Nightmares, edited by Lois Gresh. This all-Innsmouth anthology features original stories by leading writers of weird fiction. If you think you’ve read everything possible about Innsmouth, then you’re in for a major treat.

Vermilion, by Molly Tanzer. Gunslinging, chain smoking, Stetson-wearing Taoist psychopomp, Elouise “Lou” Merriwether might not be a normal 19-year-old, but she’s too busy keeping San Francisco safe from ghosts, shades, and geung si to care much about that. It’s an important job, though most folks consider it downright spooky. Some have even accused Lou of being more comfortable with the dead than the living, and, well… they’re not wrong. When Lou hears that a bunch of Chinatown boys have gone missing somewhere deep in the Colorado Rockies she decides to saddle up and head into the wilderness to investigate…

Ghosts in Amber, by Jeffrey Thomas. Limited run, only a few copies left. A darkly surreal story of loss and regret.

The Finest Ass in the Universe, by Anna Tambour. Elation, compulsion, exploration, love and exquisitely timed bullying, a lascivious oyster, a man called Eggplant, the dangers of smelling like honey pudding, the enticement of innocent toadlets, the unending day of deadness. The daughter of a part-time magician and a Las Vegas showgirl turns to science, destiny points a young man to brassiere design, suddenly orphaned siblings try to protect their most vulnerable, fortunes craze in neighbourhoods living cheek-by-jowl. Unintendeds abound, as life cavorts in all its unclassifiable contrariness.

Rangel, by Matthew M. Bartlett. Limited run, only a few copies left. Return to devil-haunted Leeds, Massachusetts with Gaspar Bantam as he seeks to come to terms with the disappearance of his little sister Rangel 30 years earlier.

Dreaming Deep, by Anonymous-9. “Lovecraftian fiction does not normally mesh well with crime—cold logic and straight facts explode on contact with the ineffable, the impossible, and the tentacular. But this time, it’s an explosion you can enjoy.” — Nick Mamatas 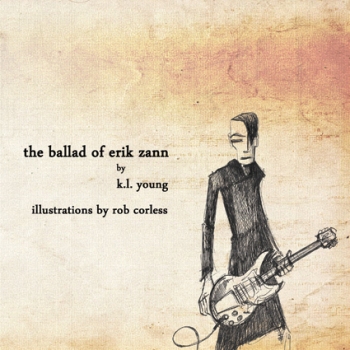 The Ballad of Erik Zann, by K.L. Young. Rock ‘n Roll meets The Old Ones in this modern-day take on love in the world of the Weird… Beautifully illustrated by Rob Corless in full color, this chapbook comes in a heavy duty 45 sleeve sleeve and will be mailed in a sturdy 45 mailer to ensure it arrives in all its daemonic glory! This first printing is limited to 99 copies, autographed by the author.

The Elder Ice and Broken Meats, by David Hambling. Broken Meats is the sequel to The Elder Ice, described by critic S.T. Joshi as having “smooth flowing prose, crisply delineated characters, effective portrayal of the historical period, and a powerful horrific climax.” A novella set in London, 1925: Debt collector Harry Stubbs is looking for a mysterious legacy left by a polar explorer. But there are other players in the game, and the legacy is as deadly as it is valuable. The trail leads to something more alien and more horrifying than Harry could ever have imagined, as he finds himself facing an enemy older than humanity…

Cthulhu Fhtagn!, edited by Ross Lockhart. What are the dreams that monsters dream? When will the stars grow right? Where are the sunken temples in which the dreamers dwell? How will it all change when they come home? Within these pages lie the answers, and more, in all-new stories by many of the brightest lights in dark fiction. 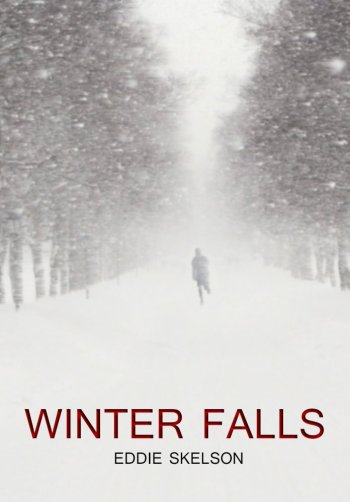 Winter Falls, by Eddie Skelson. Inspired by the H.P Lovecraft Novella “The Shadow Over Innsmouth”. The strange incidence of government and military action inside the remote New England town of Innsmouth in the 1920’s is almost forgotten, but a few years later an arrival to the Scottish town of Winter Falls brings with him the religion that was driven out of Innsmouth… 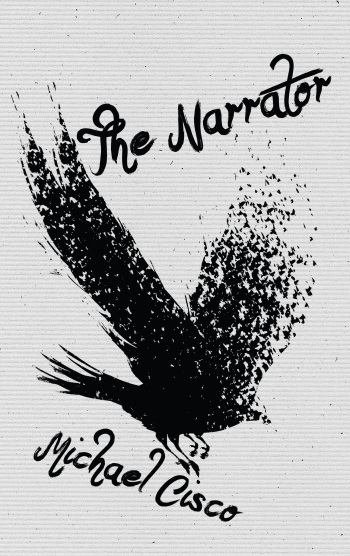 The Narrator, by Michael Cisco. “An extraordinary story of war and the supernatural that combines the creepiness of “Alien” with the clear-eyed gaze of “Full Metal Jacket”. Like “The Other Side” if it included soldiers who could glide over the water, a mysterious tower right out of early David Lynch, and infused with Kafka’s sense of the bizarre. Destined to be a classic.” — Jeff Vandermeer 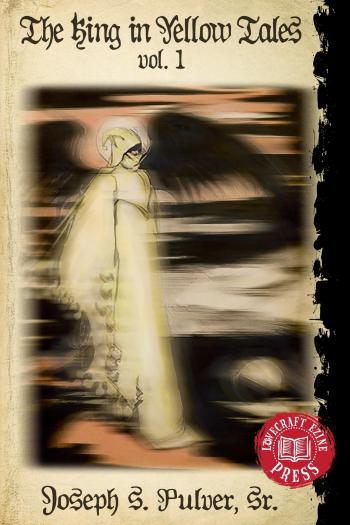 Cassilda’s Song, edited by Joseph S. Pulver, Sr. An anthology of stories inspired by the works of Robert W. Chambers that are entirely authored by women.

Delta Green: Extraordinary Renditions. The latest anthology for Delta Green, the award-winning game and fiction setting of Lovecraftian horror and conspiracy. It’s coming in September in paperback, hardback, and ebook. It includes 18 stories from the 20th century to the modern day.

I Am Providence, by Nick Mamatas. Horror writer Colleen Danzig doesn’t know what to expect when she arrives, but is unsettled to find that among the hob-knobbing between scholars and literary critics are a group of real freaks: book collectors looking for volumes bound in human skin, and true believers claiming the power to summon the Elder God Cthulhu, one of their idol’s most horrific fictional creations, before the weekend is out…

A Mythos Grimmly, edited by Jeremy Hochhalter. Fairy tales have been told in every culture since the beginning of the spoken word. Every corner of the world has stories of fairies, cats who talk, things that go bump in the night. What better way to expand on those tales than to mash them up with Lovecraftian horror Mythos?

The Leaves of the Necronomicon, edited by Joseph S. Pulver, Sr. This book will be a “round-robin” novel chronicling the birth of a copy of John Dee’s Necronomicon and it’s journey to the present day.

Legacy of the Reanimator, edited by Pete Rawlik and Brian M. Sammons. Stories in honor of the 30th anniversary of the release of “Re-Animator”.

The Gods of H.P. Lovecraft, edited by Aaron J. French. A brand new anthology that collects the twelve principal deities of the Lovecraftian Mythos and sets them loose within its pages. Featuring the biggest names in horror and dark fantasy, including many NY Times bestsellers, full of original fiction and artwork, and individual commentary on each of the deities by Donald Tyson.

Cthulhu Lies Dreaming, edited by Salomé Jones. What if Cthulhu’s dreams were real?

A Picnic at the Mountains of Madness, by Neil Baker. The first in a new line of children’s books produced by April Moon Books. The aim is to introduce children to genre authors through simple read-along books. Each book features Harrison and Kaylee, a pair of children blessed with exciting uncles who send them on all sorts of adventures. These adventures are loosely based on the referenced authors’ best-known works.

2 responses to “New and upcoming Lovecraftian and Weird books”