I believe any fan of Lovecraftian themes will enjoy both books. Laird Barron writes that “Black January unites the best tradition of thrillers and cosmic horror. Wynne expands upon Lovecraftian mythology with style.”

(By the way, Douglas Wynne is my guest on the next episode of The Lovecraft eZine podcast.)

Both books are available in print and for Kindle.

The Red Equinox has dawned, and the old gods who have slept for aeons are stirring.

Urban explorer and photographer Becca Philips was raised in the shadow of Miskatonic University, steeped in the mysteries of her late grandmother’s work in occult studies. But what she thought was myth becomes all too real when cultists unleash terror on the city of Boston. Now she’s caught between a shadowy government agency called SPECTRA and the followers of an apocalyptic faith bent on awakening an ancient evil.

As urban warfare breaks out between eldritch monsters and an emerging police state, she must uncover the secrets of a family heirloom known as the Fire of Cairo to banish the rising tide of darkness before the balance tips irrevocably at the Red Equinox. 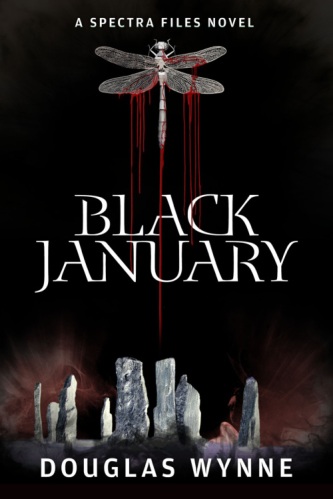 WELCOME TO THE WADE HOUSE
WHERE THE DOORS OPEN YOU

Two years after the Starry Wisdom Church unleashed their dark gods in Boston, Becca Philips is trying to put the events of the Red Equinox behind her when Agent Brooks tracks her down in Brazil. Becca has been summoned back to Massachusetts by SPECTRA, the covert agency entrusted with keeping cosmic horrors at bay. Her special perception and skills are requested at the Wade House—a transfiguring mansion of portals to malevolent dimensions.

Becca would like to refuse, but Brooks believes her estranged father may be lost between worlds at the abandoned estate. As Becca struggles with grief and forgiveness, she joins a team of explorers uniquely suited to decode the secrets of the strange house in the black snow. But what secrets do her companions harbor? And who among them will take theirs to the grave?

(FYI, Journalstone provided me with an advanced copy of Black January. But a lot of publishers do that, and I don’t post about a book if I don’t like it. Just so you know.)