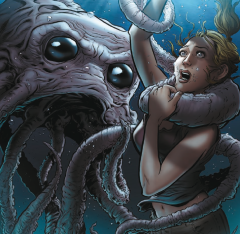 The oceans provide 99 percent of the Earth’s living space — the largest known space in our universe to harbour living organisms.  Over 90% of this habitat exists in the deep sea known as the abyss.  Less than 10% of this living space has been explored by humans.

The Challenger Deep outside Asia is the deepest known location on Earth: 10,916 metres (35,813 feet, 6.78 miles), 2 kilometres deeper than Mt. Everest is tall.  The water pressure is more than 8 tons per square inch, the equivalent of one person trying to support 50 jumbo jets…

The Vessel of Terror has all of that in spades, and from the very first pages, a feeling of doom permeates.

Tracking whales in the north Atlantic ocean, the research vessel Alesia discovers and captures what they think is a Magnapinna Squid.  The researchers are elated, but the captain isn’t as excited: 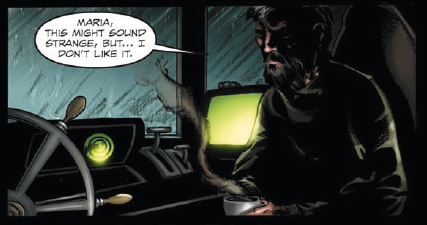 I don’t want to spoil the story by telling you what happens next.  Suffice to say that it’s not what you’d expect.  It’s a very scary, atmospheric tale with some great visuals, like a cold rain falling outside the ship in an obviously cold, bleak ocean:

There’s also a flashback story, set in 1349, at first seemingly unrelated.  Of course it isn’t, and both it and the main tale hint at one of the horrors in Lovecraftian fiction: The fear that a benevolent God does not exist, but there are other gods that do… and we are their prey.

The world is not what it seems.  We think we understand it, but we don’t.  And behind that curtain of ignorance… is terror.

The Vessel of Terror is available in print and for Kindle.

3 responses to ““The Vessel of Terror”: a graphic novel any Lovecraft fan will enjoy”