Welcome to the second installment of my “Author of the Week”! Every Sunday, I post about a Weird Fiction and/or Lovecraftian author that I feel deserves more attention.  If you have suggestions, please email me at lovecraftezine@gmail.com . 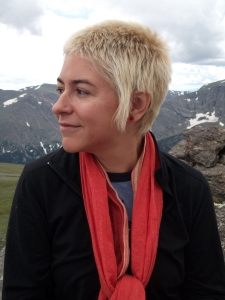 This week’s author is Molly Tanzer.  Check out her first collection, A Pretty Mouth, and read her popular story Herbert West in Love (for free!), first published here at The Lovecraft eZine.

Please tell us about yourself — as much or as little as you’d like to say.

Tell you about myself… there’s not much to say! I’m a former academic, I got my Master’s in Humanities at Florida State and did part of a Ph.D. before realizing I’d never complete a dissertation. I was really just messing around and teaching basic humanities courses while just taking random classes for the fun of it—Ancient Greek! Japanese art! Victorian disease fiction! Philosophies of the Enlightenment! History of Jazz! In the end all that nonsense sort of coalesced in my mind and made me want to write fiction. Go figure.

I sold my first story in 2010, to Running with the Pack, a werewolf anthology (“In Sheep’s Clothing”) and my first Lovecraftian story later that year, to Historical Lovecraft (“The Infernal History of the Ivybridge Twins”). That story… I guess people really liked it! It’s been reprinted several times, and my first collection was stories about the same family (A Pretty Mouth). That came out in 2012, and my second collection, Rumbullion and Other Liminal Libations, came out in 2013.

Recently I’ve been taking a semi-break from short fiction to write longer-form stuff. My first full-length novel, Vermilion, which is sort of, uh… I guess it’s a weird western Steampunk thing is forthcoming next spring (2015). Imagine… I dunno, The Road to Wellville mashed up with Mulan and True Grit, set in the historical past of Big Trouble in Little China. What? I also (shh) have another novel coming out in autumn 2015, but that hasn’t been officially announced so I can’t say much about it.

It’s so cliché, I know, but I can’t remember ever not writing. When my father passed away two years ago I was cleaning out some of his file cabinets and found stories I wrote in elementary school. About dragons and monsters and stuff. I kept a fictional journal for years, 5th through 7th grade, where I would write every day about mundane going to school stuff, but I was always accompanied by wisecracking, invisible dragons who had their own inner lives. (I read a lot of Piers Anthony and Steven Brust and Anne McCaffery for a few years.)

Then for 8th grade I was accepted to a public “arts magnet” middle/high school, where I took writing classes for the first time. It was great, and I learned a lot, though of course there was the typical “No genre!! Write about the REAL WORLD!!” attitude among the teachers and community college writing instructors they brought in to teach us.

As to why I wrote… I was a lonely kid. I’m not bitter about it, not at all, it’s just the truth. None of the kids on my block were into weird shit, and while I liked Ninja Turtles and She-Ra and whatever, I also liked to play Narnia, and since none of the other kids had read it, when that was what I wanted to do, I played alone. Then when we moved to this big cool house in the woods, it was tough to find kids to play with at all. So I mostly read, or ran around in the woods making up stories. Since I loved to read, I figured I might as well write them down.

That’s a big question! I think it’s maybe the underlying assumptions behind Weird. Like, with Capital F Fantasy, which was my go-to for years, often you find the underlying assumptions are things like… the world is fair, and just, and when some bad guy effs that up, good people have to do whatever it takes to restore order. (Obviously “grimdark” has changed all this for fantasy, but I’m talking about what I read as a kid.)

In Weird, and especially Lovecraftian Weird, the world doesn’t make sense to begin with, so all you can do when things go really wrong is… go crazy, or (better) stay sane and learn to cope with the knowledge that everything you believed or knew is garbage. The older I get, the more that… realism, I suppose, appeals to me. I already mentioned my dad passing away… maybe this is obvious, but that really affected me, when he was diagnosed with terminal cancer. Not just because I was suddenly confronted with the terrible knowledge that he was going to die sooner than I’d ever expected, but because my dad was always the healthiest guy. He cooked low-fat and low-sugar, walked and cycled and worked out with weights… and yet, earlier than most people are even diagnosed with pancreatic cancer, he died of it. What the fuck is that shit? How is that fair? Well, it’s not. It’s just terrible. Cancer isn’t a bad guy whom you can overcome with plucky courage. There are no magic swords, no secret scrolls, no hidden masters. Cancer is as close to a Lovecraftian menace as you can get in the real world—it is insidious, it gets inside you, it has no understandable mind. It consumes and destroys, and tears as many minds as it does bodies to shreds. That kind of frankness, and the managed expectations within Weird and Lovecraftiana just resonate more with me more these days.

Woah, that was way darker and more depressing than I meant it to be. And to be fair, I also like Weird and Lovecraftian fiction because it’s spooky and cool and the monsters tend to be grosser and weirder than in fantasy, though of course there are plenty of fantasy writers out there who are doing amazing things!

Well, I only have two out right now. One is easily obtained, around ten bucks, and is full of Lovecraftian goodness (A Pretty Mouth). Rumbullion I’m very proud of, especially the novella (I pitched it as “Rashomon/“In a Bamboo Grove,” with fops”) but it’s £30 and available through the Egaeus Press website. It’s a gorgeous volume, being a limited edition hardcover, with color endplates, illustrations, etc. Plus, it has tailored cocktail recipes to accompany each story… but yeah. £30.

A big thanks to Molly for taking the time to answer my questions.  Here are her books:

Henry Milliner thinks his days of being the school pariah are over forever when he attracts the attention of Wadham College’s coolest Fellow Commoner, St John Clement, the Lord Calipash. St John is everything Henry isn’t: Brilliant, graceful, rich, universally respected. And as if that wasn’t enough, St John is also the leader of the Blithe Company, the clique of Natural Philosophy majors who rule Wadham with style. But when being St John’s protege ends up becoming a weirder experience than Henry anticipated — and the Blithe Company doesn’t quite turn out to be the decadent, debauched crew he dreamed of — Henry has some big decisons to make. Should he beg the forgiveness of his only friend, naive underclassman John Wilmot, 2nd Earl of Rochester, or should he ride it out with St John and try to come out on top?

Tangling with a Calipash is an invariably risky endeavor. From antiquity to the modern era, few who have encountered members of that family have benefited from the acquaintance. If only Henry knew the that Calipashes are notorious for their history of sinister schemes, lewd larks, and eldritch experiments, he would realize there are way worse things than being unpopular…

Rumbullion and Other Liminal Libations:

A disquieting tale of 18th Century decadence, charlatanism, supernatural ritual, and violent, bloody murder, told in the epistolary style—along with a number of previously uncollected and critically acclaimed short stories.

Each piece is furthermore presented with a corresponding imbibation from Molly’s distinctive repertoire, to be concocted by the reader with the hope that his or her enjoyment of the story will be in some small way enhanced…