Article by Maikel A. Nepomuceno.

All the references to the texts will be showed through a two letter code and a number representing, respectively, the title abbreviation and the year of the first edition, followed by the page number (for instance, JO96, 358 stands for: Joshi, S.T. H.P. Lovecraft: A Life [1996], page 358). Two letters represent the tale title. The bibliography at the end relates the codes and the texts.

Lovecraft was always proud of the tale eventually entitled “Arthur Jermyn”, perhaps because it underlines one of the biggest horrors the author could imagine: that all the human species would stem from a race native to the Congo region (JO96, 236). Despite the brevity of the text, its content conveys the sense that the ruined city from the Dark continent conceals a history not even the most learned of the Jermyn was able to find out.

By the autumn of 1920, Lovecraft wrote “Facts Concerning the Late Arthur Jermyn and His Family”. It was published under this title in the Wolverine magazine for March and June 1921 in two parts: in the first one, the history of the noble Jermyn family is narrated, since the XVIII century until the beginning of the twentieth; the second part tells us, indeed, about the facts concerning the own Sir Arthur Jermyn. The tale takes place in Europe and Africa, but in this last place both continents merge into the ruins of a Congo city whose true origins are not explicitly mentioned in the story.

Sir Wade Jermyn was a pioneer in the exploration of the Congo region, though it is historically attributed to the Portuguese Diogo Cão to being the first European in finding and entering the Congo river in 1483. But it was Sir Wade who located a ruined city hidden in the tropical rainforest almost three hundred years later. Details remain a mystery, just like the origin of the city. Only the ravings of Sir Wade talk about “gigantic walls and pillars of a forgotten city, crumbling and vine-grown” (AJ, in CC99, 15). In the XVIII century the Congo basin had already been trodden by the Portuguese, so Sir Wade, for being “one of the earliest explorers of the Congo region” (ibid., 14) should have ventured into areas scarcely known by then. Therefore, the so described ruins of the city have to be located at some point inland beyond the northern shore of the Congo river, a place close to an blank area from a map dated 1770.

Nor do we know with precision who the builders of the city were, once magnificent in size. We know they could create “weird carvings” and construct deep catacombs under its walls and pillars (ibid., 15). The supremacy and intelligence of this vanished civilization are unquestionable. It becomes apparent that these beings had an anthropomorfic form, well suited to cope with tools and raise defenses against an environment that, we think, could pose a threat to them. Sir Wade describes it like a “prehistoric white Congolese civilisation” (ibid., 14) which, obviously, had originated in the area occupied by the Kingdom of Kongo, but so ancient that he dates it from “impiously aged” times (ibid., 15). And yet, it is unlikely that the English explorer knew first-hand that that civilization belonged to a white race, unless he saw it in the ruins depicted on some kind of physical support, such as the “weird carvings”. Apparently, builders of that prehistoric city were given a mental and somatic profile quite human.

However, it can be deducted from the story that a tragic event must have happened, since Sir Wade again tells that “great apes had overrun the dying city” (ibid., 15). That civilization, after having lived splendour times, began to suffer such a decadence that its defenses weakened, allowing some enemies from the jungle beyond its walls to override it. It did not disappear, because its descendants still lived in the decadent city. We come now to a point in the story of AJ that deserves special care.

The term “great ape” refers to, from a taxonomical point of view, the Hominidae, to which all great apes, even humans, belongs. But Lovecraft did not include humans in this definition, which is entirely viable, since the term can have a more indefinite connotation and refer to all apes but humans. With this in mind, the dying city was overrun by great apes (gorillas, orangutans and chimpanzees), but for unknown reasons they did not kill the survivors; rather, they lived together for some time, even crossing with them. Their progeny is so incredible that the author spare no effort in definitions. They are not only “creatures half of the jungle and half of the […] city”, but also “fabulous creatures” and even “living things” (ibid., 15). Lovecraft let the reader imagine the actual appearance of these sons of the jungle, but he does highlight that such miscegenation could only beget a progeny so unnatural that no term can describe it with certainty.

It would take a long time for such hybrid creatures to breed the white apes that haunted the ruins. So, in the XVIII century, the tale tells about a Portuguese trader settled in Africa, perhaps far from the European continent because he “did not like English ways” (ibid., 15). At some point, and probably driven by a zoophilic bent, this man coupled with a female member of these “white ape-like creatures” (ibid., 19-20) and they had a daughter. Her phisycal appearance could not be other than that of a “white ape […], less hairy […] and infinitely nearer to humankind” (ibid., 22-23). Although only the Portuguese trader is mentioned in the tale, it can be inferred that possibly he was the true dicoverer of the city in ruins. When Sir Wade arrives to Africa on his second voyage, he makes contact with the trader, meets his daughter and marries her. For some time, Sir Wade and his ape-wife reigned over the ruins as gods (ibid., 20); it is likely that the English aristocrat were deified simply as a result of having a white skin, very similar to that of his consort. The first of the Jermyn who will provide some alienation to the future human lineage is born from this union (“Certainly, the madness began with Sir Wade” [ibid., 15]): Philip Jermyn saw the light in the Congo, probably among the ruins discovered by his Portuguese grandfather.

There are no explicit references to Philip’s childhood in the tale. We know that after his birth, the child and his parents returned to England. Later on, Sir Wade and his wife came back to the Congo to live among the ruins already turned into their home. When she dies, his husband embalms her and enshrines her body into a stone building as a relic (ibid., 20). Then, he returns to England, where he dies in a madhouse at Huntingdon in 1768, not before publishing his work Observations on the Several Parts of Africa in 1768, where he collects all his knowledge on the city and its inhabitants (CM08, 212). His son Sir Philip Jermyn, now a baronet, was a sailor and had a descendant, Robert Jermyn, born in 1781. The end of Sir Philip remains a mystery; at least in 1783, he embarked on a ship which traded with Africa, dissapearing one night when his ship lay off the Congo (AJ, in CC99, 16). However, this event connects with one of the legends of the Kaliri, a tribe settled near the ruins of the city. According to the legend, the white god came back to die at the feet of his enshrined wife (ibid., 20). Obviously, it cannot refer to Sir Wade, because we know he died in England. So, it is very likely that it was his son Philip, also a white man, who returned to the ruins where he was born to die before his mother’s stuffed body.

The lineage of the Jermyn family continues with Sir Robert, Nevil (who did not inherit the title of baronet for having died before his father), Sir Alfred and Sir Arthur (see the Appendix for details on the lineage). It is Sir Arthur who, in 1913, ends an unholy miscegenation which transcends the family nucleus. In fact, the acceptance that not only the Jermyn, but all the existing human race, has been mixed with the blood of a white ape-like race is the kernel of AJ; and it is thus suggested by the strong sentence in the first paragraph: “if separate species we be” (ibid., 14). Joshi holds that the city in ruins is the source for all white civilization (JO01, 90). At some time in the past the progeny of the white apes (descendants, in turn, of the great apes and members of the original white civilization that built the city) migrated out of Africa and spread all over the world to found the white race (AJ90, in PS03, 160). These emigrants would be an isolated branch who left the main group in the city, wherefrom the white ape who will mate with the Portuguese trader in the XVIII century will emerge. The branch which spread around the world represents the origin of all hominidae, leading the way up to the Australopithecus, who lived in Eastern Africa about four million of years ago. From then on, anthropology collects all the human evolution scientifically proven. But we know from Arthur Jermyn that science is really unreliable.

Below is a diagram showing all the main events previously mentioned, since the building of the Congo city until the Jermyn family (click to enlarge):

The lineage below belongs to the Jermyn family and is based upon the information provided by AJ. Dates in italics have been worked out from the text and are not shown in it (click to enlarge): 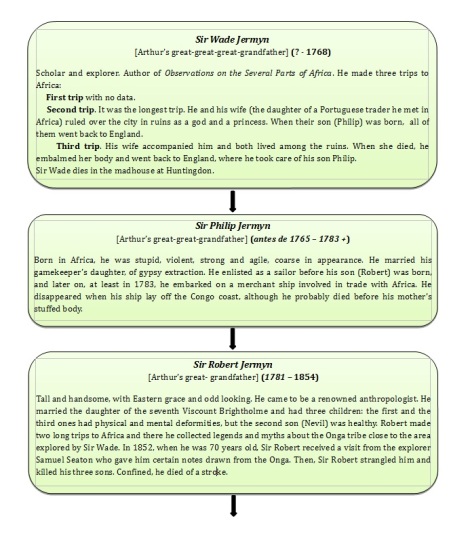 Regarding historical and scientific details, Wikipedia has proven to be very useful. Below, the codes sorted alphabetically and texts named in the essay are connected.

AJ “Facts Concerning the Late Arthur Jermyn and His Family”

10 responses to “A Separate Species: The Origin of the Jermyn”