Scooby-Doo is the marijuana of cartoons. It’s the adolescent’s gateway drug to darker, more disturbing horror. That was certainly true in my case, for after years of wolfing down the adventures of Fred, Velma, Daphne, Shaggy, Scooby, and the Mystery Machine, I began to crave something more—something less reassuring. In a word, I wanted my monsters to be real for a change, not just shoddy criminals in rubber masks and suits coated in phosphorus.

Unbeknownst to most, the Scooby-Doo franchise has quite the lineage. Before Hanna-Barbera and writers Joe Ruby and Ken Spears debuted the show in 1969, plenty of fictional detectives had already battled seemingly supernatural foes who turned out to be nothing more than imaginative thugs. In France, where super criminals like Fantômas ruled the pulp world as quasi-surrealist observations about the insidious nature of urban terrorism, Arthur Bernède created a proto-Scooby-Doo novel in the form of Belphégor, a 1927 mystery about a treasure-obsessed criminal who dresses up like a demon in order to search the Louvre for hidden treasure. Across the English Channel, Edgar Wallace, an author so prolific that a frequently cited statistic asserts that he was responsible for producing one-quarter of all the books read in England during the 1920s, crafted novels about masked criminal societies who threatened isolated castles or London townhouses surrounded by thick fog. Wallace, like the later creators of Scooby-Doo, typically disguised his bizarre crime stories as horror tales up until the final reveal.

Finally, during the height of the pulp magazine era (of which H.P. Lovecraft was an active participant) publishers tried to expand upon the combined popularity of the mystery and horror genres by creating the so-called “weird menace” sub-genre. Originating in Dime Mystery Magazine around 1933, weird menace stories more often than naught presented stories that emphasized torture, physical violence, and sexual intrigue. Scholar Robert Kenneth Jones, the author of The Shudder Pulps: A History of the Weird Menace Magazines of the 1930s, defines the entire sub-genre as “a form of story in which the villain perpetrated seemingly supernatural deviltries, which were logically explained in the end.” Usually, personal gain in the form of wealth or status motivated weird menace villains, while weird menace heroes often joined in the mystery after the abduction of a loved one.

Add to these literary concoctions the influence of 1940s radio serials and you have the basic formula for the entire oeuvre of Scooby-Doo. From the late 1960s until the 1990s, the franchise rarely deviated. When it did, such as in Scooby-Doo! and the Ghoul School (1988) and Scooby-Doo! and the Reluctant Werewolf (1988), the real monsters were anything but frightening. On top of that, these forays into the extraordinary were stand-alone films. Even the brilliant Scooby-Doo! on Zombie Island (1998), which helped to connect the franchise with an older audience thanks to a more horrific storyline that includes actual, non-human creatures, didn’t move the product too far beyond its roots.

Briefly, the story can be summarized as follows: throughout the centuries, ever since the founding of the coastal town of Crystal Cove, gangs of mystery solvers have been intentionally formed and guided by the evil entity in order to initiate its own release. The entity itself, which was placed in a crystal sarcophagus by its fellow Annunaki gods during the days of ancient Egypt, was brought to the shores of colonial California by vicious conquistadors interested in treasure. After slaughtering Yucatan villagers and stealing the sarcophagus from the apex of a Mayan temple, the conquistadors realized that their prized possession housed a great evil. They decided to bury the entity behind four alchemical gates deep underneath the city they named Crystal Cove as a nod to the accursed item.

Because of the evil underneath the city, Crystal Cove is known internationally as “The Most Hauntedest Place on Earth.” It acts as a magnet for everything aberrant, which explains why costumed criminals flood the place so often. However, real evil in the form of Professor Pericles (voiced by horror stalwart Udo Kier), the parrot mascot of an older version of Mystery Incorporated, returns to Crystal Cove in order to retrieve a planispheric disk, set the Nibiru cataclysm in motion, and release the Annunaki god from his aeons-long slumber.

A pop culture Cuisinart, Scooby-Doo! Mystery Incorporated not only presents a patchwork of previous incarnations of the Scooby-Doo franchise (not only does Velma’s mother Angie run a Hall of Fame dedicated the “monsters” previously caught by her daughter and her friends, but some of these monsters from the 1960s version of the show return to their criminal ways), as well as other franchises within the Hanna-Barbera universe (Johnny Quest, Captain Caveman, and Jabberjaw just to name a few), but it also takes bits and pieces from popular horror films, comic books, and television shows. References abound, from the puzzle box of Hellraiser (“The Hodag of Horror”) to John Carpenter’s iconic theme from Assault on Precinct 13 (“When the Cicada Calls”). Furthermore, it’s clear that the show’s creators know their way around the nerdier portions of the internet, for not only do the “monster-of-the-week” episodes make good use of such folkloric and cryptozoological fiends as Krampus and the Manticore, but the narrative arc shows a certain comfort with the ideas of Zecharia Sitchin (who is named explicitly in the show) and other modern conspiracy theorists. 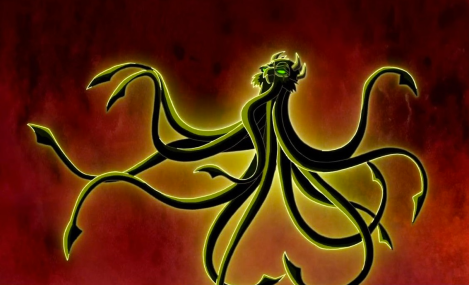 The evil entity in its most powerful form

Readers of this website will be glad to know that H.P. Lovecraft, the twentieth century’s foremost practitioner and proselytizer of the weird tale, is included as well. Indeed, a character named Professor H.P. Hatecraft, a reclusive author of horror novels who teaches at Crystal Cove’s Darrow University, is Lovecraft’s stand-in. Voiced by actor Jeffrey Combs, who is best known for portraying Herbert West in 1985’s Re-Animator, Hatecraft appears in two episodes—“The Shrieking Madness” and “Pawn of Shadows.” Of the two, “The Shrieking Madness” is the loving homage to Providence’s greatest export. Set on the campus of Darrow University, “The Shrieking Madness” concerns Char Gar Gothakon, the tentacled monster of Hatecraft’s own creation. A Cthulhu dressed in wizard robes, Char Gar Gothakon terrorizes Darrow with his deafening and foul-smelling shriek until Scooby-Doo and company find the right amount of clues and eventually trap the ghoul atop of Hatecraft’s gothic mansion. As if all of this wasn’t obvious enough, “The Shrieking Madness” also includes a character named Howard E. Roberts and an appearance from Harlan Ellison (voiced by none other than Ellison himself).

In “Pawn of Shadows,” writer Mitch Watson has a little fun at Hatecraft/Lovecraft’s expense by including him in a story involving Regina Wentworth and the Dusk series of novels. An obvious parody of the Twilight series, the popularity of the Dusk novels on the Darrow campus forces Hatecraft to try his hand at writing teenaged romance novels. It’s as cringeworthy as it sounds.

Please, whatever you do, don’t let the Scooby-Doo! brand fool you. Scooby-Doo! Mystery Incorporated is not a children’s show. While it is certainly campy at times, as the series progresses, the stories become much more obsidian. For example, not only do prominent characters die violent deaths, but some of these deaths are caused by Professor Pericles’s Kriegstaffelbots, a robotic army so obviously inspired by National Socialism that their stahlhelms are decorated with small red, white, and black emblems. The hellish, almost Bosch-inspired landscapes that decorate the final episodes are pretty much guaranteed to keep your toddler up at night.

At the other end of things, Scooby-Doo! Mystery Incorporated deals a lot with love and romance. For the first time in franchise history, relationships and relationship problems are given to the main characters. Fred and Daphne are on-again, off-again partners, while Velma and Shaggy experience a very brief courtship. Outside of romantic interests, the show also tackles familial issues, especially when Fred suffers two betrayals at the hands of his parents. In sum, Scooby-Doo! Mystery Incorporated is not just mask-removing escapism; it’s almost an adult show.

Professor Pericles and one of his Nazi robots

Thanks to a well-written and engaging take on the apocalypse, as well as a bevy of star power (voice actors on the show include Lewis Black, Patrick Warburton, Mark Hamill, James Hong, Gary Cole, Vivica A. Fox, Tia Carrere, John O’ Hurley, and many more), Scooby-Doo! Mystery Incorporated is the most fully realized series in the entire history of the franchise. It’s also its best. Without a doubt, the use of cosmic horror and Lovecraftian tidbits such as mentions of Miskatonic University and the Cthulhu Mythos are a large part of the show’s success. Hopefully, future installments of Scooby-Doo will once again tap into Lovecraft’s legacy in order to create something even more haunting.