I wish you could see my hand tremble with excitement as I write these words, for The Loney by Andrew Michael Hurley is a truly captivating novel. The Loney was first issued in a small run by Tartarus Press, known for releasing beautiful editions of Aickman, Shiel, and Machen alongside modern-day practitioners of similar caliber.

The Loney is a quiet, nearly contemplative novel that speaks with its voids and silences. The novel opens with news of the discovery of a child’s body in the muddy bay of The Loney, “that strange nowhere between the Wyre and the Lune” on the NorthWest Coast of England.

“Dull and featureless it may have looked, but The Loney was a dangerous place. A wild and useless length of English coastline. A dead mouth of a bay that filled and emptied twice a day and made Coldbarrow an island. The tides came in quicker than a horse could run and every year a few people drowned.”

Smith, the middle-aged narrator who one quickly realizes has never been able to let go of his childhood, casts his mind back to his last pilgrimage to that very spot in 1976 when he was fifteen. Easters previous Smith, his Mummer and Farther, his older brother Hanny, Father Wilfred, and other local parishioners traveled to The Loney from London. Their purpose is to visit a holy shrine where their bitterly devout mother believes Hanny will receive a miraculous cure for his double afflictions of being mentally challenged and mute.

Except now Father Wilfred, a strict disciplinarian who guided his flock with a stern hand through the varied rituals of esoteric Catholicism, lost his faith and died under mysterious circumstances which may or may not have been tied to a revelatory experience he had while walking upon the beach of The Loney. Smith, who Mummer had insisted train as an altar boy, may have insight into this mystery. The priest’s replacement, Father Bernard McGill, is a little more forgiving and humanist in his approach. This does not sit well with Mummer. Father Bernard endears himself to the altar boys by giving them nicknames, Smith becomes Tonto for his faithful nature and this as well draws further disapproval from Mummer.

Contrary to this group of urbanite pilgrims traveling to spend a week in prayer, contemplation, and ritual, are the villagers with their threatening physicality and hints of something far older. Even when they provide assistance the villagers can’t help but exude a quiet menace. Animals found in fields, bells tolling at night, lights over the bay and a traveling performance of the Pace Eggers – imagine a Punch and Judy show performed by drunken men in your living room – the tone grows steadily more ominous as the novel travels on.

Yet as I said, this is a novel that speaks in silence. Hurley is fearless in knowing what not to write. A well dressed couple with an expensive car renting a dilapidated, isolated house with a heavily pregnant fourteen year old girl confined to a wheelchair who says she’s done this all before and it gets easier with time. The writing is elegant in its simplicity yet when called for shocking in its effectiveness. I know I shall never forget, “As she went past, she lifted up her glasses and looked at me with her grey milky eyes that were slick and glossy like the underside of a slug.”

Part of the joy in reading The Loney is Hurley’s confidence with form. The Gothic broods quietly behind all. The house that the parishioners traditionally rent is the former home of a deceased taxidermist which still houses not only his unsold creations but also stockpiles of the necessary supplies for his vocation. Mysterious locked rooms, closets which lend themselves to eavesdropping, the use of emotion to express transgression, all of the tropes are fully on display.

Our beloved cosmic horror is also at work, more accurately perhaps in its guise as existential horror. The horror within The Loney is slight, small in scope and all the more terrifying for it. This existential horror does not require elder gods, if anything I feel it is more in line with what Donald Crowhurst may have experienced. Hurley again does not belabor this point and instead it’s through his use of landscape that he not only sounds those chords of cosmic horror within but also introduces the third trope of horror he uses to such great success within The Loney. 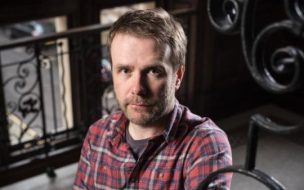 Though strands of folk horror have been running under the radar for decades the phrase recently exploded thanks to Mark Gattis using it as an encompassing term to cover a number of films in his 2010 A History of Horror documentary for BBC4*. In that documentary Gattis pointed towards three films, Witchfinder General, Blood on Satan’s Claw, and The Wicker Man as setting the blueprint for what we have come to know as folk horror. Works of this nature deal with rural landscapes and populations enmeshed within pagan, witchcraft beliefs or folklore. Previous to now Thomas Tryton’s Harvest Home or Arthur Machen’s The Great God Pan would be the most suggested literary works when one asked about dipping their toes into the folk horror genre. I have no doubt The Loney will now take its rightful place alongside them.

Yet it is a highly skilled, restrained hand that wields the brush here. Only enough to lend the suggestion in each of these three cases, the breath upon the back of the neck, and then once more are we wrapped in story for Hurley never forgets Flannery O’Connor’s admonishment that storytelling is a dirty business.

What drove this novel for me was the relationship between the brothers, Smith and Hanny. Hanny being mute and mentally challenged keeps his coat pocket stuffed with various items to communicate with Smith.

”A rabbit’s tooth meant he was hungry. A jar of nails was one of his headaches. He apologised with a plastic dinosaur and put on a rubber gorilla mask when he was frightened. He used combinations of these things sometimes and although Mummer and Farther pretended they knew what it all meant, only I really understood him.”

Hanny does not understand the prayers and rituals, supposedly for his benefit, going on all around him. Not being Catholic I had a hard time understanding them myself. His confusion and rising frustration adds to the tension as Smith struggles not only to care for his brother but to shelter him from all involved. These characters and their relationship are the key to the terrifying horror of The Loney for when it arrives it is late in coming, it whispers in the ear, and it is truly apocalyptic.

For a soundtrack I found myself listening to Terry Riley’s The Harp of New Albion while reclined in my favorite chair. I was delighted to find the full album online for all of you:

* Yes my dear friend I do realize the term “folk horror” was first properly coined in a 2003 Fangoria magazine interview with Piers Haggard to describe his 1973 movie The Blood on Satan’s Claw. I was referring to when the term was popularized.

This article written by Acep Hale