I believe my love for self-published work by this point should be well-known. So when the mail woman delivered a slim, handsome volume entitled We are the Makers of Maps my interest was definitely piqued. The design sensibility calls to mind the work of the NSK collective, which given the contents of Maps, the works referenced and the quotes used I doubt the volume’s author A(W) Baader is entirely ignorant of NSK’s output.

Paired with the design sensibility of the front cover we have on the back the following quote:

Of course none of this would matter if the contents inside did not live up to its cover. We are the Makers of Maps is an interesting work to review for you and first let me lay out why this is and why I think you will enjoy it.

We are the Makers of Maps starts with a short two page, front and back, concrete poem entitled “Maps” before another short two page piece entitled “East” that if pressed I would call a prose poem piece. These establish a mood for “The Downfall of the Good Worker Laura McTavish,” the centerpiece for the volume itself. Without giving away too much of the story the titular character works for the city’s planning department verifying building permits, a job she enjoys because of her love of maps. Until a building proposal crosses her desk that is filled out perfectly, down to the last perfectly placed period, except for an intersection of streets that she has never heard of in the city she has lived in all of her life. 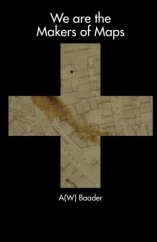 Baader is elegant in evoking the strange in simple, unadorned lines. It’s this simplicity that disarms. His characters are instantly believable with just enough detail provided for the reader to identify with yet not so overloaded it hampers the imagination. He trusts his reader’s intelligence instead of pandering to them. The manner in which Laura reacts to this building proposal and the revelations her research brings to bear upon her psyche are believable and in a large part all the more unsettling because of the understated simplicity of A(W) Baader’s prose. Subtle is not a word often used to describe weird fiction and all the more reason to celebrate it when we can.

“in these ways we remember” is a short piece that I quite enjoyed for the timeless quality it evoked. The milieu Baader paints could take place anywhere, anytime from the far distant past to the far distant future of a Dying Earth.

The volume closes with “An Autumn Note” and at this point I am going to quit trying to classify these small pieces of evocative writing that act as grace notes to the slightly longer stories of Maps. In fact this is why I so love We are the Maker of Maps. This slight volume simply begs to be read again and like a piece by Satie these simple phrases build and assert themselves with greater force as you read and re-read. Baader’s fiction colors and infects the reader’s view of the world.

Now I was well and truly hooked and quickly snagged the Kindle only release Hinterland. At the close of Hinterland Baader writes:

This is the second edition of Hinterland. I reissued it so that it would have a similar look and feel to my other releases.

This is a wonderful idea. Hinterland and We are the Makers of Maps do feel of a piece and work quite well as a symbiotic whole. “Glen Dhearg” which opens the volume highlights Baader’s sense of place in an atavistic tale of illumination that unsettles without ever firmly placing its finger. Many writers attempt to create a sense of unease without ever 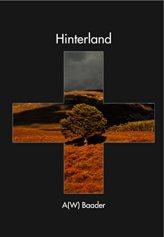 revealing its cause simply to fall flat. Baader succeeds because of his singular voice. After reading a few of his tales I feel confident in saying most would be able to identify a story as one of his creations with ease. “Blas am Byth: an horrible fragment”,“Men of the City” and “The Dolly Doll” are three shorts I found particularly enjoyable but please bear in mind I describe myself as a transcendental nihilist and an exuberant pessimist. If these ideas resonate with you as well then these short tales, that concern themselves with why the dead do not wish to be remembered, those reborn from a living city where men walk with the words of a new holy book crawling across their flesh and of course  -one can’t escape then nowadays- dolls, then you should feel quite at home.

Which leads us to “And the Filth Flows …Always” which feels as a companion piece to “The Downfall of the Good Worker Laura McTavish” from We are the Makers of Maps. As such I don’t wish to dig too deeply into this story and ruin the surprise for you except to say this is an extremely well executed piece. When it reminded me of Reza Negarestani’s Cyclonopedia at first I felt a touch of guilt because I feared I was reacting to a very surface level reading but then realized that both Cyclonopedia and “And the Filth Flows …Always” -indeed both volumes of Baader’s work- deal with very similar themes and topics it was one of those great “Aha!” moments. Given how I love and adore Negarestani’s work it is a testament to how much I enjoyed reading Hinterland and We are the Makers of Maps.

With these two slim volumes A(W) Bader has quietly asserted a distinctive voice upon the scene. When I say that I welcome the rise of the self-published I liken it to the freedom and independence of the DIY ethos upon the music industry. There are those who were not in that subculture and only know it from the prepackaged collections that present it as a three chord distorted and homogenized whole. They have no memory of dropping the needle on a German Shepherds album of lo-fi tape loop madness and going, “What fresh hell is this?” In a similar vein the “Seattle Sound” is presented as one unified whole of Black Sabbath worship yet I will always treasure the memory of The Posies swapping their stage, crosstown, instruments and all, with The Young Fresh Fellows, neither of which could ever be accused of what mass media would tell you was the “Seattle Sound”. Our self-published writers carry on a similar and likewise beautiful task. Free from constraints they are allowed to do as they please, to play with form and function, to incorporate concrete poetry, to go back and revise previous designs to make their work as of a whole. The only thing asked of them in this day and age is to have the courage to embrace their vision, a call that A(W) Baader has fully answered.

Soundtrack for this review, of course:

Purchase We are the Maker of Maps here.

This review by Acep Hale.