Purchase a copy of The Secret of Ventriloquism here.

I do not wish to waste your time so if you’re reading this with a question in mind, unequivocally go buy Jon Padgett’s The Secret of Ventriloquism. I highly doubt you need my encouragement to do so, the Internet is awash with well deserved praise. You and I have been at this long enough that I do not feel as if I’m giving away any secrets in saying that if I’m writing about an item for Lovecraft eZine it’s to spread the word about a work I enjoyed and think you would as well. 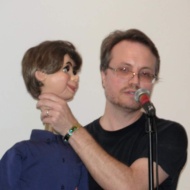 You know as well I like to avoid revealing the secrets that await you within the volume in question. This review will be an exception. I intend to speak quite frankly about a few of these and I encourage you that if you are going to purchase The Secret of Ventriloquism that you bookmark this review and return to it after reading the book. Experiencing Jon Padgett’s creation cold, unprepared and without any forewarning of what awaits is the best way forward in my estimation.

The problem with collections of course is by the time they arrive you’ve in all probability read a solid chunk of the material within. I often feel as if I’ve paid for a book two or three times over by the time I’ve read the thing. The centerpiece of The Secret of Ventriloquism is “20 Simple Steps to Ventriloquism,” both as a short story nestled within the heart of Jon Padgett’s book and as a small, self-published pamphlet containing instructions for those in search of Greater Ventriloquism and finally Ultimate Ventriloquism. This caught my interest when I first read it in The Grimscribe’s Puppets as I was making my living as a street performing magician in Seattle’s Pike Place Market. The finale to my act was the cups and balls, one of the oldest magic routines for street performers. One act that has always caught my interest is from the English fairs of the Middle Ages where the magician was famous for having a skull on his table that through his clever use of ventriloquism would harangue and harass him bitterly throughout his cups and balls routine to the uproarious delight of his audience.

This brings us to another interesting point about “20 Simple Steps to Ventriloquism”. In recent years French researchers have pointed out that magic, being as it is a temporal and performative art, is by its very nature a mercurial and elusive topic for study and so have turned their attention towards magic’s ephemera; playbills, advertisements, and instructional pamphlets. Jon Padgett has recreated this with his fictional volume, 20 Simple Steps to Ventriloquism. I can very easily imagine this booklet as a physical object, the slightly greasy feel of the cheap paper used to print such pamphlets, the faded red border motif commonly used in their production. I have a collection of similar fairground material explaining all manner of sideshow acts and applaud Padgett that he has found an imaginative and resourceful way to add another volume alongside The Book of Eibon, De Vermis Mysteriis, The King in Yellow and of course The Necronomicon. That he slipped a slim, poorly mimeographed and self-published pamphlet alongside these hoary and dread old tomes speaks volumes to the sly wink and knowing nod from the abandoned ventriloquist’s dummy in the corner.

Rogan P. Taylor in his book The Death and Resurrection Show: From Shaman to Superstar states that ventriloquism maintains the strongest direct links to shamanism in modern day performing arts. The ability to give voice to inanimate objects, to channel messages from the other side into living dolls has been thoroughly documented  in anthropological literature world wide for over two centuries. The thrust of Taylor’s book is that due to the rise of Christianity the West lost contact with the “underworld initiatory” aspect of shamanic knowledge. This knowledge instead went on to form the seed of modern performing arts and performers carried the traces of this knowledge in their travels. Taylor fills Death and Resurrection with numerous examples not only of shamanic acts that served as the basis for modern day circus routines (trapeze, high-wire, ventriloquism) but also demonstrates how nearly all art is concerned with the “underworld initiation” aka “death and resurrection”. I doubt there would be little disagreement between Padgett and Taylor should they find themselves sharing cocktails at some point in the future.

As you can tell “20 Simple Steps to Ventriloquism” hooked me. Hard. I read it multiple times within The Grimscribe’s Puppets. I read it here on this very site. So by the time I reached the story once again within the middle of The Secret of Ventriloquism truth be told I

was leery of reading it yet again. What if it felt diminished? By this time I’d read the story half a dozen times. There comes a point at which you’re allowed to skip a story. I am very glad I did not because this is the version of “20 Simple Steps to Ventriloquism”. I do not know whether this is from editorial decisions or rather the cumulative effect of details that build throughout the stories within The Secret of Ventriloquism. Here lies the reason I wrote previously of skipping this review and simply purchasing the book. I’m sure you can call to mind dozens of times within horror fiction the protagonist reacting “with dawning realization”. Padgett has managed to capture that feeling and evoke it in such a way that you the reader, not one of the characters within a fictional story, experiences this dawning realization. It’s one hell of a trick, this piece of side arm snookery, and no I am not going to tell you how he accomplishes this beautiful bit of legerdemain. You’ll have to pony up to see what’s inside. Should you glimpse the wires or catch a flash of mirror, if the make-up on the young ingénue is a touch cracked and tawdry, you still will not be disappointed. Strangely this will merely seem to heighten the effect.

“20 Simple Steps to Ventriloquism” is not the only story to benefit from the effect of being included within this volume. I first read “The Indoor Swamp” within Xnoybis #2 (thank you Slatsky) and my response to the story was flat. It didn’t stick with me and left me unmoved. Yet within The Secret of Ventriloquism, following on the heels of “The Mindfulness of Horror Practice” and “Murmurs of a Voice Foreknown” it landed perfectly. This is the point. The Secret of Ventriloquism is not only a fine example of wonderful writing but an accomplished illustration in the art of assemblage.

“Origami Dreams” was when all of this unfolded and the revelation truly shone forth. From reading other’s comments on the Internet I am not alone in this reaction. There’s more, much more within this book but that’s for you to discover. I’d only fumble with such a carefully crafted construction and that’s territory best explored between you and The Secret of Ventriloquism. I knew going in this would be a treat, any book with an introduction by Matt Cardin is bound to make me sit up and take notice, but this was something unexpected. This too is when my ramblings on the hidden knowledge within art comes to the fore. Padgett’s work with guided meditations, lucid dreaming, nested dimensions, theatrical plays and of course that newest addition to the urtexts of Lovecratian fiction, 20 Simple Steps to Ventriloquism, mirrors Rogan P. Taylor’s examinations of the very subject within The Death and Resurrection Show. Should Padgett’s creation cast a darkened eye towards our views of transcendence this would merely place him in line with Steven Norquist, U. G. Krishnamurti, Suzanne Segal and John Gray among others. Given the levels of suspicion traditional societies viewed their shamanic figures one could be forgiven for thinking this has been a long standing trait. As Thomas Ligotti observed, no one likes a pessimist.

One of the first lessons any great comedian learns is that the personal is universal and within The Secret of Ventriloquism we are allowed to watch Padgett using his personal obsessions as fuel for his artistic vision. The Secret of Ventriloquism’s courageously naked display coupled with its adroit manipulation of the reader’s expectations makes for a singular reading experience. Padgett’s  work enraptured me on both an aesthetic and a philosophical level without my ever being aware of either. I cannot wait for Jon Padgett’s next book. He is a comedian of the abyss that yawns beneath our blissfully unknowing steps and as Michael O’Donoghue knew it is every humorist’s duty to inflict that second smile – “the slit that appears when a throat has been cut”.

Soundtrack by Sevendeaths from his new album Remote Sympathy.

Purchase a copy of The Secret of Ventriloquism here.

This review was written by Acep Hale.